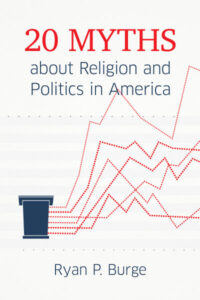 20 Myths About Religion and Politics in America

An Excerpt from the Introduction

There’s something that happens when you work with data every day that I didn’t fully understand until just a few years ago. Insights begin to materialize that lead to further analysis—and in my case, to an even deeper understanding of the religious and political landscape of the United States. After doing all that work, I’ve come to realize that the way that most people think about religion and politics is only loosely linked to any empirical reality. Instead, it’s based on anecdotes, a quick scan of news headlines, or worse—just flat-out lies told by bad actors trying to push a religious or political agenda on a distracted public. That’s incredibly caustic for the future of American politics and religion, because facts are the building blocks of not just debate but all aspects of a civilized society.

So I want to help readers see what I see in the data. Some of it will upset you, some of it will surprise you, and hopefully some of it will change you. Altering our understanding of the world based on new information is not a sign of weakness but great intellectual strength.

“There is nothing like facts to get in the way of our opinions, and I’m especially a fan of Ryan Burge’s ability to blow the lid off of cherished but mistaken thinking. Each of these twenty myths is worthy of debunking.” —Scot McKnight, Northern Seminary

“Americans love bad statistics–particularly the kind that prove what we already feel. But math does not care about our feelings, so sometimes we need a reminder of the facts. Ryan Burge’s 20 Myths about Religion and Politics in America is just the book we need to set the record straight and help us better understand the facts today.” —Ed Stetzer, Billy Graham Center at Wheaton College

“Burge’s straightforward writing and artful presentation of data cut through many of the misconceptions that plague our national dialogue about politics and religion. Can a clearer understanding of the facts help with such polarizing topics? There is only one way to find out.” —Arthur E. Farnsley II, the Project on Religion and Urban Culture 2.0 and the Association of Religion Data Archives