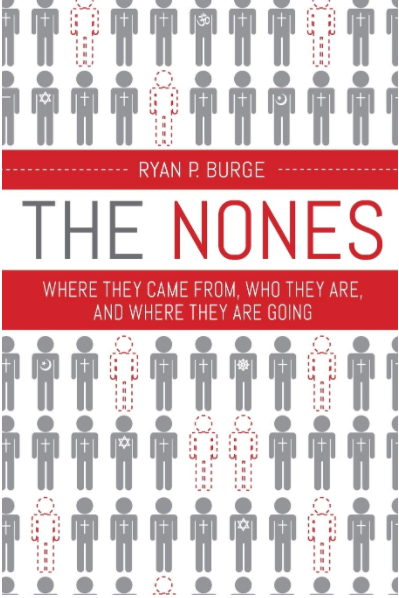 About the Book
In The Nones: Where They Came From, Who They Are, and Where They Are Going, Ryan P. Burge details a comprehensive picture of an increasingly significant group—Americans who say they have no religious affiliation.
The growth of the nones in American society has been dramatic. In 1972, just 5 percent of Americans claimed “no religion” on the General Social Survey. In 2018, that number rose to 23.7 percent, making the nones as numerous as both evangelical Protestants and Roman Catholics. Every indication is that the nones will be the largest religious group in the United States in the next decade.
Burge illustrates his precise but accessible descriptions with charts and graphs drawn from over a dozen carefully curated datasets, some tracking changes in American religion over a long period of time, others large enough to allow a statistical deep dive on subgroups such as atheists or agnostics. Burge also draws on data that tracks how individuals move in and out of religion over time, helping readers to understand what type of people become nones and what factors lead an individual to return to religion.
The Nones gives readers a nuanced, accurate, and meaningful picture of the growing number of Americans who say that they have no religious affiliation. Burge explains how this rise happened, who the nones are, and what they mean for the future of American religion.
About the Author
Ryan P. Burge is an assistant professor of political science and the graduate coordinator at Eastern Illinois University. He teaches in a variety of areas, including American institutions, political behavior, and research methods. His research focuses largely on the intersection between religiosity and political behavior, especially in the American context.
Previously, Burge completed an appointment as a post-doctoral research fellow at the Paul Simon Public Policy Institute in Carbondale, Illinois. While there he was an adviser on survey methodology and polling, and he provided data collection and analysis.

He has published more than a dozen articles in well-regarded peer reviewed journals, including Politics & Religion; Journal for the Scientific Study of Religion; Review of Religious Research; Journal of Religious Leadership; Representation, Politics, Groups, and Identities; Journal of Communication and Religion; and Social Science Computer Review.
In addition, his research has been covered in a variety of media outlets including The New York Times, The Washington Post, CNN, Vox, 538, Christianity Today, Religion News Service, The Daily Mail, Deseret News, and C-SPAN. He is cofounder and frequent contributor to Religion in Public, a forum for scholars of religion and politics to make their work accessible to a more general audience.
Burge is a pastor in the American Baptist Church, having served his current congregation for more than fourteen years.
Endorsements for the Book
“For pastors and church leaders it is important that we steward well our understanding and use of statistics, especially when it comes to understanding and explaining the the rise of the Nones. In this most helpful book, The Nones, Ryan Burge provides an aerial view of the American religious landscape as well as an amplified view of the rise of the Nones—America’s fastest growing demographic. When you’re finished reading this book, you will see the American religious landscape as it is—not as you think it is.”
— Ed Stetzer, Executive Director of the Billy Graham Center at Wheaton College
“Ryan P. Burge deploys his expertise as a sociologist and his experience as a pastor to provide an invaluable, insightful, and detailed portrait of the Nones, . . . a reality that anyone involved in ministry or interested in society ought to understand. The Nones is an excellent guide.”
— David Gibson, Director of the Center on Religion and Culture, Fordham University
“You can’t minister to those you don’t understand. The Nones will expand your knowledge of the rapidly growing ‘religiously unaffiliated’ population. Using straightforward analysis and rich graphics, Ryan Burge masterfully uncovers the origin, character, and future of this diverse but influential group. This analysis concludes with advice for addressing the spiritual needs of the “Nothing in Particular Nones.” The Nones belongs on every pastor’s bookshelf.”
— Scott Thumma, Professor and DMin director at Hartford Seminary and director of the Hartford Institute for Religion Research
“Every section in this book brings me pain as a confessing Christian, but I want to know what is being experienced among those who find my faith inadequate or unhelpful. Be prepared to be distressed and disturbed, but take heart: the pain will lead you to what the gospel has the power to create anew.”
—Scot McKnight, professor of New Testament, Northern Baptist Theological Seminary

“Clearly written with even clearer illustrations, The Nones by Ryan P. Burge explains who the nones are, why their numbers are growing, and what this means for the church. You need not be a “numbers person” to read this book. You need only to care why the religious landscape has changed so much over the past forty years.

The story of the nones is complex. There is no single cause for their rise and, for the church, no single solution. Burge does what few can: He explains a layered statistical story in words and easy-to-interpret graphics that any educated reader can understand.

The highest praise I could offer is that this is the book social-scientists will give it as gifts to their friends from other walks of life. Pastors, lay-leaders, and seminarians should expect to find this  one in their stockings this year, because Ryan P. Burge has explained the complex story of the nones in words and tables that any educated reader can understand.”

“Every time I talk to Ryan P. Burge I learn something new. He is one of the sharpest academics studying religion in the country. Burge brings both a sharp eye for data and a small-church pastor’s insight into the changes affecting the American religious landscape. If you want to understand the rise of the Nones—those who claim no religion—and how faith groups might respond, this is the book for you.”

“For years pastors and Christian leaders have almost glibly talked about the none-ing of America. Finally, there’s a book that can help them better understand both the rise and the diversity of spiritual nones. As a social scientist and a local church pastor, Dr. Burge is uniquely qualified to help pastors make sense of the huge shifting religious landscape of America. This book will become a recommended resource of the Send Institute as we help denominations and networks strategize starting new churches for the future.”
–Daniel Yang, Director of Send Institute, Wheaton College Billy Graham Center
“With so much data coming at us, there is a need for reliable sources of data, based upon rigorous, trustworthy research. To receive that data in a digestible and plausible form seems too much to ask, but Ryan P. Burge has done just that. From the ‘3 Bs’ to the ‘Nothing in Particulars,’ The Nones is chock-full of nuggets for both the avid researcher and the responsible citizen.”
–C. Jeff Woods, Interim General Secretary of The American Baptist Church, USA