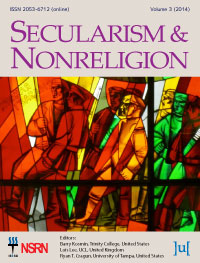 Anyone who has ever written and distributed a survey knows that the process can oftentimes be drawn out and incredibly tedious. It is almost inevitable that the survey author will realize that they forgot to ask about a specific topic, did not offer enough response options, or did not fully investigate a possible question ordering effect. However, oftentimes these oversights can be seen as opportunities. In the 2010 wave of the Cooperative Congressional Election Study, when individuals were asked about their present religion, the response options did not include a choice for atheists, which is present in all other waves of the CCES. If an atheist was taking the questionnaire in 2010 and did not see the optimal choice that described their religious affiliation, what was their backup option? Using both descriptive analysis and machine learning techniques, we try to determine where these misplaced atheists went in the 2010 CCES. In general, we found that the vast majority chose one of the other religiously unaffiliated options: agnostics or nothing in particular, but a significant minority chose another religious tradition. We believe that these results help illuminate how atheists think about their religious affiliation and give researchers more insight into the religious landscape of the United States.